At the management level, I have worked in a large public foreign company, a large public Japanese company and a small privately held Japanese company over several decades.  I would like to present to you the differences in the decision-making process of those three types of companies I have found and give some ideas on how to be successful, particularly in Japan.

First, I must define a good decision-making process.  It involves four factors:

Quality:  How good are our decisions?  Are outcomes successful?
Speed:  How fast are decisions made and executed?
Execution:  How efficiently is the execution process of the decision managed?
Effort:  What is the expense of time, energy and assets to achieve what was decided?  Is it too much or too little? 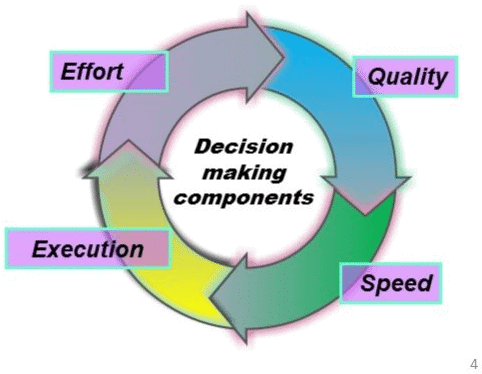 To reach a quality decision, it has to be based on relevant facts.  Was there a good analysis of potential risks?  Were alternatives evaluated against the final decision?  Did the decision take into account the ability to execute what was decided? In most large Japanese companies, they do a good job in the above, sometimes even too good.  For privately held Japanese companies with single owners, sometimes personal preferences can adversely influences gathering quality facts.  Therefore, I try to gather as must relevant and reliable facts as possible and make what facts I have as visible as possible for all to see and understand.  This will weaken any resistance to a decision based on pure executive preferences.

Speed in making decisions is influenced by the speed of information gathered, sharing and distribution.  It is also influenced by trust with low trust levels slowing information gathering down.  Fast decision-making can save money and improve profit, so it is financially important.  Also, quick decisions can improve customer satisfaction and employee morale.  Considering the above benefits of quick decisions, a company can create a competitive advantage over slower companies if done efficiently.  Japanese large corporations tend to be weak when it comes to quick decision-making.  Sometimes, although you might not know it at first, the decision-making process in Japan is all a show.  No one wants to come up with a solution, but rather to leave all as is.  In cases like this I have doubled my effort in information gathering and strategic questioning to keep things moving forward.  After a while, if I think this is all a show as I mentioned above, I will cut my losses and drop the project until another time.

With the benefits of quick decisions in mind, I often try to determine (in both large and small Japanese companies) if the decision can be modified later.  If it can, I push for quick decisions and keep a close eye out for the need for later modification.

This is often forgotten in the decision-making process.  Who is going to put the decision into action?  Are the abilities, skills, capacities and assets available to execute the decision?  Quite often it is excellent execution, not the brilliants of the decision, that creates a competitive advantage.   In Japan, some projects are all political and will die eventually because there are no details for execution.  I like to create a Gantt chart of what has to be done.  I ask people what the tasks required are and the time each task should be completed (start & finish).  Put it into a chart and present it to everyone.  Then, I let the group discuss what each task is and when each should be completed.  After that, I have the group assign milestones to monitor progress.

Like execution, effort and resources given is often forgotten in the decision-making process.  If not watched carefully, you can consume far more resources than the project warrants.  What I am referring to is the time and resources spent throughout the decision-making and execution process.  What is the trouble caused and effort applied by all involved?  How much emotional energy is spent?  Some resources must be spent, but it must be less than the benefits gained by the decision.  This effort in time and resources must be managed.  The effort could be too much or too little considering the value of the project.  We all know the expression “analysis paralysis”; sometimes the analysis might not be worth it in time, energy and resources.  In promoting projects in Japan, I try to avoid product development fine tuning or too much market research, but just ask for a prototype to be put together and see what people (potential customers) think about it.  Try to sell it and see what happens.  Armed with feedback from them, you can plan the next step.  I have been successful several times with this strategy with Japanese products going abroad.  Study “Lean Start-up” and you’ll know what I’m referring to.

Think of five key players in the decision-making process.

Recommending person:  Who makes the first recommendation that something should be decided on?  What options or alternatives does he recommend?  What is his final recommendation?  This person is usually close to the problem or opportunity.  If he isn’t, his effort will weaken.  Comparing the three types of companies I mentioned above, I have found large Japanese companies have the worst environment for offering recommendations particularly to top manager.  In small production sections, I have seen wonderful environments for offering suggestions though.

Specialist:  Who are experts or specialists that know many of the concerns that may arise with the recommendation(s) given?  These are the lawyers, accountants and technical specialists that should advise that a project is doable or not in the current legal environment (Japanese or foreign).  These people usually can say no to a decision but not yes.

Researcher:  Who will be responsible for gathering information, data and facts?  This includes resource/skill requirement facts.  This person gathers information to find out if a project is viable.  Armed with good front-line data, a decision can be made regarding the value of a decision.  This is true anywhere.

Decision-maker:  Who will make the final decision and be responsible for its outcome?  In the Japanese large public company environment this person might not be so visible.  Therefore, I spend extra effort to learn who has “official authority” (the boss) and who has “unofficial authority” (a person with great respect/loyalty/experience) to make a decision.  With that knowledge, I can plan my decision-making strategy.

Performer:  The decision-maker does not have the final word on any project.  The person who actually executes it does.  He can make it a great success or a horrible disaster.  Therefore, we have to know who will actually execute the decision until it is successfully completed.  What is this “performer’s” attitude toward the success of the decision?

I have given presentations on the above several times in both English and Japanese.  Have a look at: http://www.slideshare.net/RonMcFarland1/developing-a-competitive-advantage-in-the-decisionmaking-process

I can also make a Japanese version available of it if anyone is interested.

Ron McFarland has been working in Japan for 40 years, and spent more than 30 of them in international sales, sales management training, and expanding sales worldwide. Over the last 14 years he has established distributors in the United States and throughout Europe for a Tokyo-headquartered, Japanese hardware cutting tool manufacturer.

More recently, he’s begun giving seminars in Japanese to small Japanese companies wishing to expand both their exports and overseas investments, and been involved in supporting foreign companies interested in entering the Japanese market. Ron has more than 50 SlideShare Presentations on his channel.